Horry-Georgetown Technical College (HGTC) is proud to announce that the Outboard Marine Technology Program developed a “Top Tech” award in memory of Mr. Marshall Altman, Vice President and President of Marshall's Marine for 18 years. Mr. Altman played a crucial role in establishing the first and only Yamaha Outboard Marine Technology Program in South Carolina at HGTC. A ceremony was held to honor his family with the surprise announcement and present the first-time award to a deserving student.

“If you knew Mr. Marshall Altman, he would often say that working in the marine industry was not just a job or a career, it was a lifestyle. He told us that in order to be great at what you do, you must study it, know it, live it, and breathe it. Mr. Marshall Altman was that perfect example for all of us in this program,” said Matt Springs, HGTC Professor of Outboard Marine Technology. 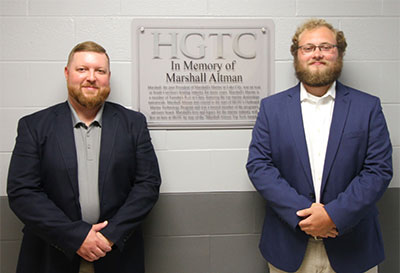 Originally from western North Carolina, Sturdivant completed a two-year automotive program at Wilkesboro Community College in Wilkesboro, North Carolina. Then, he planned to enroll at HGTC in the Diesel Engine program. Once he found out the program was full, he was led to pursue Outboard Marine Technology. He immediately fell in love with the coastal area and his experience with offshore fishing. After taking his fresh catch to a restaurant right on the docks in Little River and enjoying what the chef prepared, he was hooked on the lifestyle! Besides living the lifestyle, Sturdivant never missed a day of class, always had a positive attitude, showed up early or stayed late, was eager to learn, and helped in any way he could.

According to Springs, “Luke Sturdivant has exceptional professionalism and earned the respect of his instructor, as well as his classmates. Luke will no doubt become a successful marine technician. He is already working part-time at Saltwater Marine in Wilmington, North Carolina.”

The Outboard Marine Technology program was created in response to a significant local industry need for a skilled workforce in this area. The marine industry is growing at a rate that the technician labor supply is not matching.

“When Mr. Marshall Altman approached HGTC about an outboard marine program, he was taking the monumental step in securing the future of the marine industry and establishing a crucial alliance. The partnership, formed between Marshall Marine, HGTC, and Yamaha, proved to be an essential piece to the sustainability of the marine industry,” said Dr. Marilyn Murphy Fore, HGTC President.

The Outboard Marine Technology program runs for three semesters and provides training that covers all components and functions of an outboard engine including service, diagnostic electrical systems, rigging, propellers, lubrication, lower units, and fuel systems. After completion of the program, students will obtain skill sets needed to enter the workforce as an Outboard Engine Technician.

The HGTC Outboard Marine Technology program is the only one in the state of South Carolina and has the most graduates in the nation. The program is full through the fall of 2023.