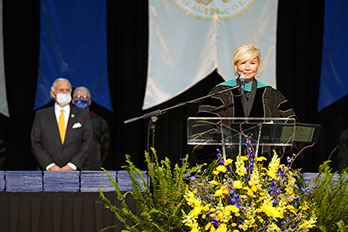 HGTC’s President Dr. Marilyn Murphy Fore presided over the ceremony and celebrated the success, hard work, and dedication of the Class of 2021.

“Graduating from college is a major accomplishment, requiring many sacrifices, and you should be proud. Your journey to this point may have seemed daunting as you coped with rigorous course loads and dealt with personal or financial challenges that sometimes put your graduation in doubt. Through it all, you remained faithful to your goal—a symbol of your determination and the value you place on your HGTC education,” said Dr. Marilyn Murphy Fore, HGTC President.

Graduates’ ages ranged from 17 to 76, and students came from states as far away as Washington and Texas and from countries as far as Japan and Uzbekistan.

A number of awards and honors were given during the ceremony:

The College adhered to strict COVID-19 guidelines, including social distancing and guests were required to wear masks.  This was HGTC’s fifty-fifth commencement.

Professor of the Year 2021 – Jason Whiteside 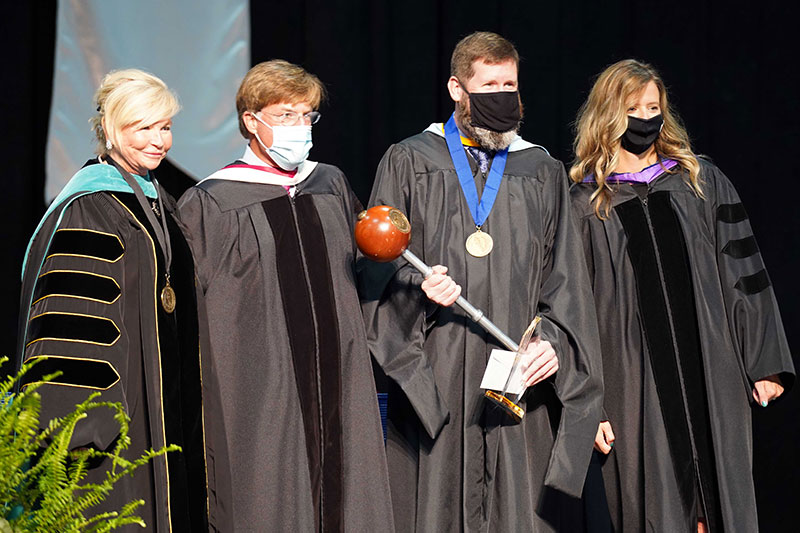 More than two decades ago, HGTC began a tradition of recognizing a member of our full-time faculty for instructional excellence, contributions to students’ growth and development, and contributions to the academic reputation of the college.    The College continued that tradition this year with the naming of the outstanding “Professor of the Year.”  This year’s honoree was presented with the college mace and will serve as grand marshal at the 2022 commencement ceremony.

The 2021 Professor of the Year has been described as a mentor as this professor not only teaches students, but also encourages them to persevere when they want to quit.  Students continually express how the professor genuinely cares about their success and inspires a love for learning because of a unique perspective and positive outlook.  This professor is described as relatable, authentic, and genuine. His dedication to quality in teaching has changed hundreds of lives.   This professor holds a Bachelor of Science Degree in Biology from Coastal Carolina University and a Master of Arts Degree in Biology from The Citadel.  Originally from Rutherfordton, North Carolina, he began his career as a high school science teacher and guidance counselor and served as a South Carolina State Certified Senior Pharmacy Technician for Walgreen’s Pharmacy and Waccamaw Community Hospital.  He initially joined HGTC as an adjunct faculty member in 2010 teaching Anatomy and Physiology and has served as Professor of Biological Sciences since August 2014.  Although he is adored by his students, fellow colleagues, and administration, his greatest admirers are his mother, father, siblings, siblings by marriage, grandparents, nieces, and nephew.  This is what his mother, Charlotte, told the College about her son Ton, which is his nickname.  “Ton, we are all so very proud of your accomplishments.  Your hard work, determination, and tenacity, along with your ability to make people laugh, continues in all you do within the classroom.  What an honor to think of the lives you have molded, guided, and enriched by doing what God created you to do…teach.” 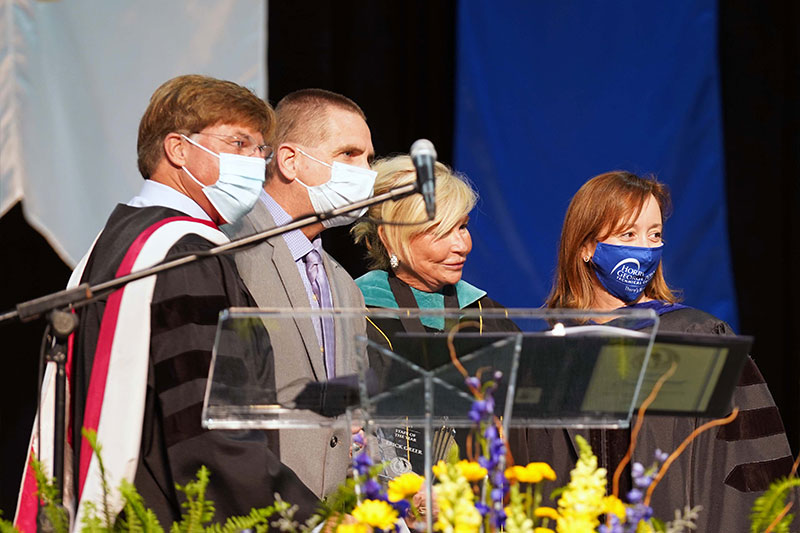 Just as HGTC recognizes excellence in teaching, the college also honors a member of the full-time staff for exemplary service.  The recipient receives an award from the College and the HGTC Foundation.

The 2021 Staff of the Year has proven dedication to HGTC with a strong work ethic.  In his 19 years of service to the College, he has given extraordinary time and energy to ensuring that everything is in “perfect order.”  Colleagues say that this staff member sets the tone for their day and makes students and employees feel welcome.  He has selflessly completed his tasks on campus each day in a most unusual year.  As the sanitation engineer at the International Culinary Institute, he keeps the building in pristine shape so much so that visitors think it looks brand new because of his thoroughness.  He genuinely cares about the College, the appearance, and the cleanliness.  This staff member is the epitome of a true “team player” in the workspace, always willing to take on extra tasks to improve the organization.  His wife, Susan, agrees that no one is more deserving.  She said, “Words cannot express how proud I am of him and all that he has accomplished.  He always puts his heart and soul into the mission of the College, and I know it shows in his work doing more than required.  As his spouse, I have always admired the way he lives by First Thessalonians, Chapter 4, verses 11 through 12.  Thank you for putting God first in everything you do.”  His wife is here with us to cheer him on in receiving this worthy award. 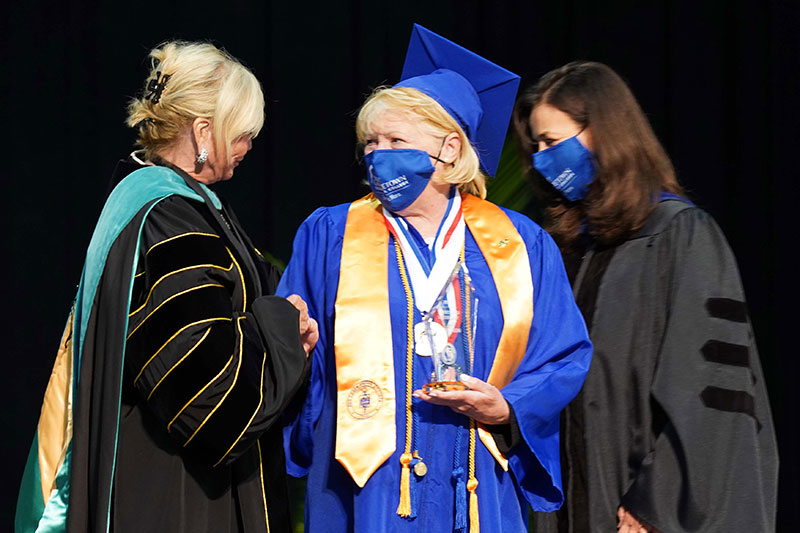 The Service and Leadership award is presented to an exceptional student who best exemplifies the values of HGTC.  Recipients make significant leadership contributions and demonstrate the values of responsible citizenship.

The 2021 recipient of the Service & Leadership Award became an exceptional member of Phi Theta Kappa from the moment she was inducted.  She is being honored for playing an important part in the Honors in Action Committee that focused on addressing the mental health needs of students during the pandemic.  In addition, she participated in a college-wide project that concentrated on food needs among students and served on the team that revitalized the food pantry on all three HGTC Campuses.  Her invaluable efforts led the chapter to achieve great honors.   Her presence as a team officer turned a challenging year into a positive experience.  Most recently, she was selected for the 2021 Phi Theta Kappa All-USA Academic Team and was honored as an outstanding student by her professors with a $5,000 scholarship.

HGTC honored three extraordinary public servants who have been instrumental in the success of our College, higher education, and technical colleges across the state.

Dr. Luther Carter serves as the president of Francis Marion University since 1999 and led the University during a period of exceptional growth and development. He has presided over the launch of numerous new academic programs, enhanced the fiscal stability of the University and its foundations, and expanded the prerogatives of shared governance in partnership with the University’s faculty. Carter’s career has been devoted exclusively to public service. He served as the chief of staff to South Carolina Governor Mark Sanford, and as the senior executive assistant to South Carolina Governor Carroll Campbell. He has also served on the faculties of the College of Charleston, the University of Central Florida, and Western Kentucky University. He received his BA degree from the University of Central Florida and was awarded the university’s distinguished alumnus award in 1999. He earned his MPA and PhD degrees from the University of South Carolina and was recognized by the University’s College of Arts and Sciences as its distinguished graduate alumnus in 2006. Carter also served as an infantry officer in the Marine Corps and retired as a Colonel in the U. S. Marine Corps Reserve. He and his wife, Folly, have two children, Luke and Bryan, and three grandchildren.

Dr. David A. DeCenzo is president emeritus of Coastal Carolina University. He began his tenure as the University’s second president in May 2007 and retired in December 2020. His presidency was centered on elements that aptly characterize his life and leadership – tradition, integrity, and excellence. Under DeCenzo’s leadership, CCU’s academic program expanded to 95 undergraduate majors, 27 master’s degrees; two educational specialist degrees; and two doctoral programs: the Ph.D. in marine science, and the Ph.D. in education. The University’s enrollment of 10,000 students reflects a more than 35% increase since 2007. During Dr. DeCenzo’s journey undergraduate minority enrollment has been a priority at the University. Black student enrollment increased 81% and Hispanic student enrollment increased 361%. In 2018, CCU hired its first chief diversity, equity, and inclusion officer, who guides efforts to conceptualize and cultivate diversity and inclusion as an institutional resource. CCU has been consistently recognized by U.S. News & World Report, including being ranked among Southern regional universities in the “Best Value” category. In addition to leading a multi-million dollar building campaign, DeCenzo oversaw Chanticleer Athletics’ transition from the Big South Conference to the Sun Belt Conference, which marked the University’s move up to the Football Bowl Subdivision, the highest level in intercollegiate athletics. CCU’s baseball program captured the 2016 College World Series title. DeCenzo earned a bachelor’s degree in economics from the University of Maryland, College Park, and a master’s degree with emphasis on labor economics and a Ph.D. in industrial relations, both from West Virginia University. He and his wife, Terri, have four children, Mark (Jen), Meredith (Ryan), Gabriella, and Natalie (Scott), and four grandchildren. 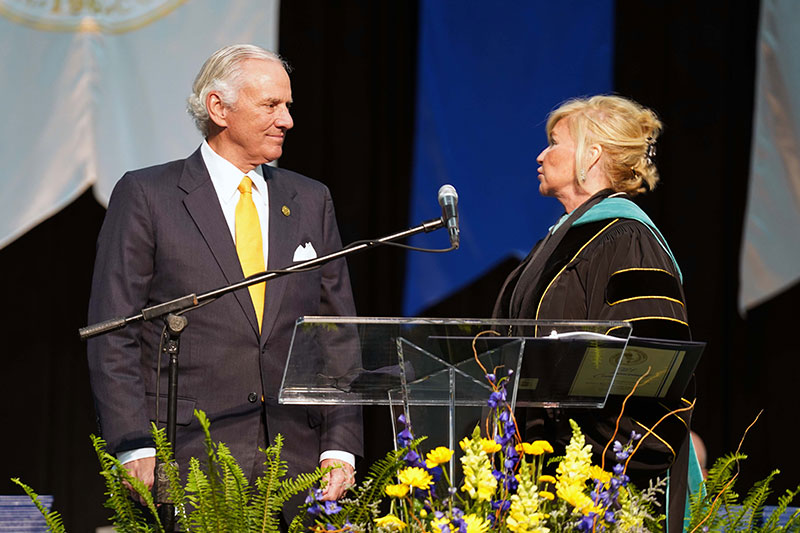 Henry Dargan McMaster of Columbia became the 117th Governor of South Carolina on January 24, 2017 and was elected to a full term as governor in November 2018. Governor McMaster has led a strong and vibrant South Carolina economy, announcing more than 45,000 new jobs and over $13.5 billion in new capital investment in the state. Under his leadership, the state has made transformative investments in the classroom by expanding full day four-year-old kindergarten, raising K-12 teacher pay, and placing a school resource officer in every school. Colleges and universities are becoming more accessible and affordable due to the governor’s tuition freeze and by his doubling of funding for needs-based financial aid for in-state students. Prior to becoming governor, McMaster served two years as lieutenant governor, eight years as attorney general and four years as United States attorney, appointed by President Ronald Reagan. Governor McMaster has served on the South Carolina Ports Authority Board of Directors, the South Carolina Commission on Higher Education, the Palmetto Health Foundation Board, and the South Carolina Policy Council (as chairman). He is admitted to practice in all courts, state and federal, in South Carolina, as well as the U.S. Court of Claims (1974), the U.S. Court of Appeals for the Fourth Circuit (1975) and the Supreme Court of the United States (1978). Governor McMaster received his BA degree in history in 1969 from the University of South Carolina and his JD degree in 1973 from the University of South Carolina School of Law, where he served on the South Carolina Law Review. He served in the U.S. Army Reserves in the JAG Corps from 1969 to 1975. Governor McMaster is married to Peggy McMaster, and they have two children, Henry D. McMaster, Jr. and Mary Rogers McMaster. They are members of First Presbyterian Church of Columbia. 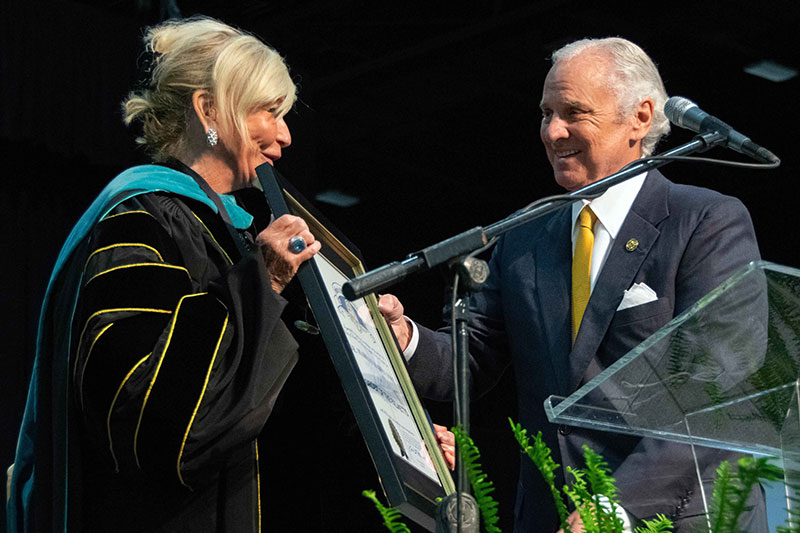 HGTC President, Dr. Marilyn Murphy Fore, was presented with the Order of the Palmetto at the 2021 HGTC Commencement Ceremony.