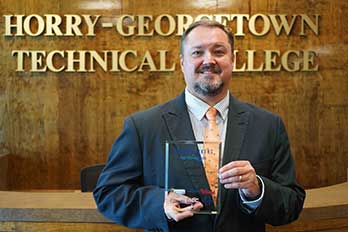 Horry-Georgetown Technical College (HGTC) is proud to announce that one of its own has received the Jefferson Award. Dan Hoppe, HGTC Executive Director of Academic Services and Professional Development, was presented with the award recently through the inaugural Grand Strand ChangeMakers Program hosted by the Multiplying Good organization.

The ChangeMakers Program highlights the leadership and service of professionals and community leaders and celebrates the positive change brought about in their communities. Dan was nominated and selected by members of the Grand Strand community.

“It was a wonderful experience being part of the ChangeMakers Program and my absolute honor to receive the Jefferson Award,” said Dan Hoppe, HGTC Executive Director of Academic Services and Professional Development, who was also nominated and voted to serve a three-year term as a regional and state level board member for Multiplying Good and the ChangeMakers Program.

“The mission of Multiplying Good is to use the power of celebration to inspire others to take action and give back. Through our ChangeMakers platform, we celebrate the best of the Grand Strand’s professional class by recognizing them for their commitment to community, all while setting an example for the younger generation of how they can continue serving and volunteering after graduation—ultimately following in the footsteps of our ChangeMakers and becoming our community’s next generation of servant leaders,” said Heather Love, Executive Director of Multiplying Good, South Carolina.

The main focus of each ChangeMakers class annually is to support and raise awareness of Multiplying Good’s Students In Action which works with High School aged youth in discovering what they are passionate about through leadership activity, training and collaborative projects.

In the Grand Strand area, Dan has contributed and volunteered his time and leadership with a variety of organizations, including: