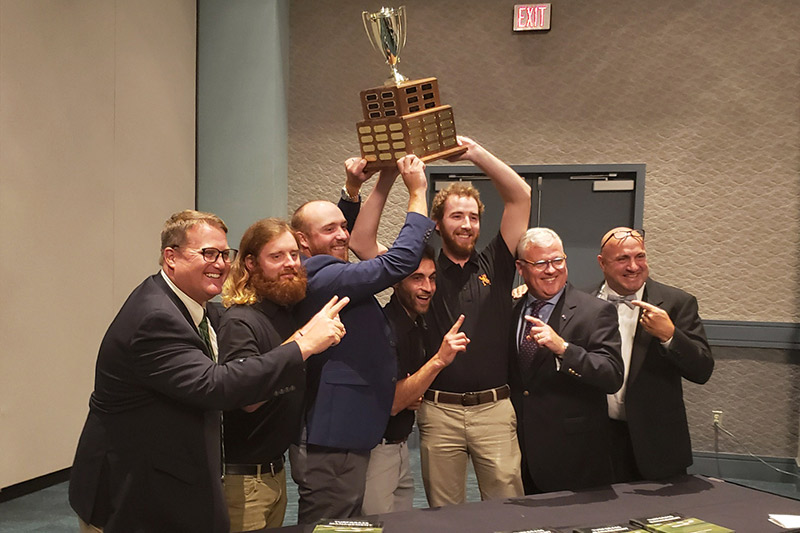 A Golf Course Industry article written by Matt LaWell described the win as a “Cinderella story” of sorts.  “Yes, the Horry-Georgetown Technical College Turf Bowl team captured another championship at the Carolinas GCSA Conference and Show. That result proved familiar, identical on the surface to eight of the previous 19 trivial pursuits at the annual gathering. But the challengers were unexpected and their strategy provided what can be best described in hindsight as a rope-a-dope,” said LaWell.

The HGTC Fighting Mole Crickets team was no doubt considered the underdog in the competition.  Three of the four team members were Turf Bowl rookies still in their first months of turf school but, that didn't stop them from raising the trophy and beating both North Carolina State University teams, Clemson University, and numerous others.

“It is always great to see our students being rewarded for their hard work,” said Charles Granger, HGTC Professor and Chair of Golf & Sports Turf Management.  “Three of the four students have only been in the GSTM program since August.”

Competing against four-year universities, HGTC seems to always be considered inferior in the competition.  The majority of the students competing from larger universities in the state are juniors and seniors.

“No other first year team has ever won the competition,” continued Granger.  “We thought they had a chance to make it to the second round.  We had a first year team come in second a few years ago, but never a winner from any school.”

Professors McCauley and Wilkinson have been teaching two of the categories in this year’s competition.

“HGTC is proud of its students and proud of this win,” said Dr. Marilyn Murphy Fore, HGTC President.  “We may be underestimated at times but, our students are truly the masters of the game and have an outstanding record to prove it.”

HGTC has captured the prize six of the last 10 years.