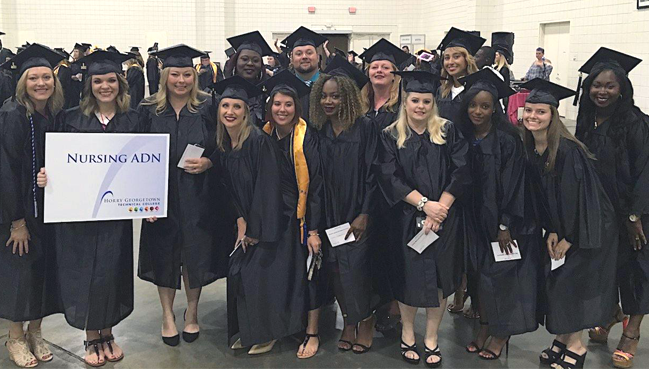 Awards for a student or student group earning the “Alpha Nu Sigma Service and Leadership Award,” “Professor of the Year” and “Staff Member of the Year” were announced during the ceremony.

The vice chair of HGTC’s Human Services program, Renee Robyn Causey, was named “Professor of the Year” for her service to students and local groups that address helping the disadvantaged in our community, including The Sheperd’s Table and Sea Haven.  Professor Causey was the first executive director of Waccamaw Youth Center in Conway and later worked with in New York with Mayor Michael Bloomberg as Assistant Commissioner of Youth and Community programs.

HGTC “Staff Member of the Year” was Alfreda Lewis, the college’s recruiter for employment.

Local businessman Robert Rabon, a graduate of HGTC, was named Patron Emeritus for his support of public education. Rabon, formerly on the Coastal Carolina University Board of Trustees, serves now on the board for Grand Strand Water & Sewer Authority. In 2008, he was an advocate on behalf of “The Education Penny” sales tax providing funds for construction and technology in public schools, CCU and HGTC for 15 years. Horry County is the only county to have this source of funds for education.

“The Education Penny” provided funds for a new building to house engineering technology and golf and sport turf programs at HGTC, seed money for the International Culinary Institute of Myrtle Beach, and funds for an advanced manufacturing center under construction in the Conway.

This was HGTC’s fifty-first commencement.