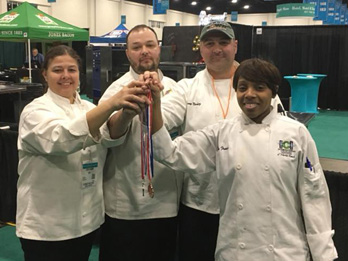 (Myrtle Beach) Feb. 9, 2018 – A team of students from the International Culinary Institute of Myrtle Beach (ICI) won silver and bronze awards in the 2018 Culinary Chefs Competition at the 42nd Annual Hotel, Motel and Restaurant Supply Show in Myrtle Beach on February 1, 2018. The team consisted of Danny Nunez, Raygan France, Dewey Fowler and Teresa Baran and was coached by ICI Chef Geoffrey Blount.

“I am extremely proud of this team and how well they handled their first time under pressure while Master Chefs judged their every move,” said Chef Geoffrey Blount. “They learned a lot during this competition and in their work preparing for it, and are ready to take on the Southeast Regionals.”

The competition was sanctioned by the American Culinary Federation (ACF) and the World Association of Chefs Societies. The team goes on to compete in the ACF Southeast Regional Competition in Charlotte February 23-25, 2018.