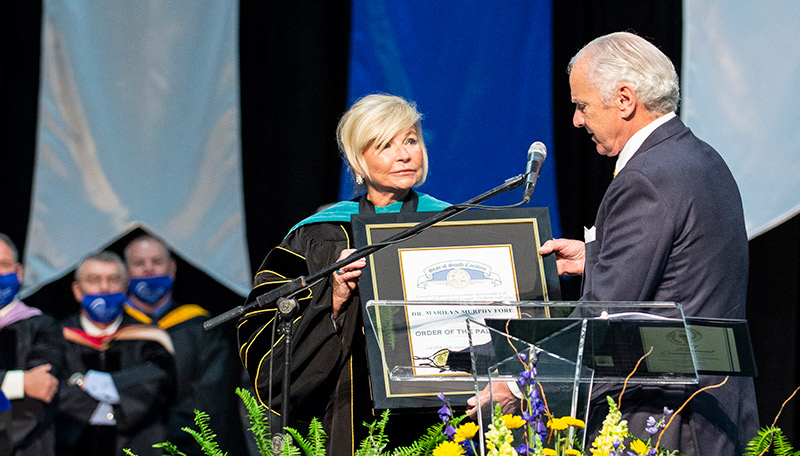 Horry-Georgetown Technical College (HGTC) President, Dr. Marilyn Murphy Fore, was presented with the Order of the Palmetto at the 2021 HGTC Commencement Ceremony. The presentation of the award was not on the program and came as a complete surprise to President Fore. Governor Henry McMaster presented the award after she honored him with the HGTC Distinguished Patron Award.

According to the Governor, President Fore achieved the recognition with flying colors. Dr. Fore’s experience at Horry-Georgetown Technical College (HGTC) spans through several leadership roles from Professor of Economics to Academic Dean, and Senior Vice President of Academics to the first female President of the College, a position she has held since April 2017.

Governor Henry McMaster presented the award with these words of affirmation:

“She is a woman of inspiration, imagination, and determination. She has built partnerships, evident today, with Francis Marion University and Coastal Carolina University using our creative collaborate, communicate, and cooperate to build strength. She has led the implementation of digital classrooms, developed more than 80 programs of study, served on more than 30 accreditation teams across the southeast, and helped create the Early College High School model for the nation. She owns a number of degrees, well earned. She is an accomplished leader. She is one of the best South Carolina has to offer.”

“Thank you to Governor McMaster and to all of those who have supported me through my work with Horry-Georgetown Technical College. I want the students to know that it is my love for their success and my journey to achieve my degrees that made this all worthwhile.”

“Dr. Fore's proven commitment to the highest quality education for our students stands as an exemplary model for our citizens. Innumerable students' education, careers and lives have been influenced by Dr. Marilyn Murphy Fore's outstanding work at Horry-Georgetown Technical College.”

The Order of the Palmetto is the state’s highest civilian honor awarded to citizens of South Carolina for extraordinary lifetime service and achievements of national or statewide significance. The Order of the Palmetto is a once in a lifetime achievement. The award is not anything that can be bought, applied for, or in any way received except upon recommendation by one’s peers and others. The recommendations are checked, confirmed, and evaluated to determine if the recipient is indeed worthy of the highest recognition that the state, over 5 million people can give, which is presented by the Governor.