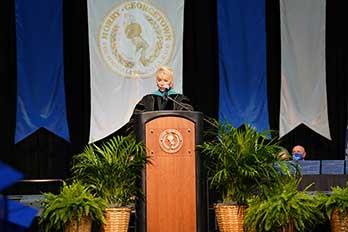 HGTC’s President Dr. Marilyn Murphy Fore presided over the ceremony and celebrated the students’ success and the hard work and dedication it took for them to get to this day.

Graduates’ ages ranged from 17 to 75, and students came from states as far away as Maine and Minnesota and from countries as far as Vietnam and the Philippines.

A number of awards and honors were given during the ceremony:

The College adhered to strict COVID-19 guidelines, including social distancing and guests were required to wear masks. This was HGTC’s fifty-fourth commencement. 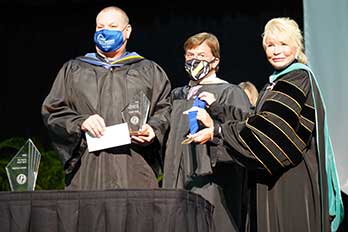 Professor and Academic Chair for the Advanced Manufacturing and Industrial Technologies Department, Jeff Ball (left), received the coveted Professor of the Year Award. Tim Tilley (center), Vice-Chairman for the HGTC Foundation presented a gift on behalf of the Foundation.

More than two decades ago, HGTC began a tradition of recognizing a member of our full-time faculty for instructional excellence, contributions to students’ growth and development, and contributions to the academic reputation of the college. We continued that tradition this year with the naming of the outstanding “Professor of the Year.” This year’s honoree was presented with the college mace and will serve as grand marshal at the 2021 graduation ceremony.

Our 2020 Professor of the Year has been an ambassador and champion for manufacturing for decades. He holds an Associate in Applied Science degree in Welding and HVAC from Williamsburg Technical College in addition to several diplomas and special certifications. He began his career at Duke Power Company in 1981 at the Catawba Nuclear Station as an x-ray pipe welder. He worked for several construction companies before becoming a welding instructor and test shop supervisor in 1986. His passion for welding and love for students moved him into teaching positions at Andrews High School, the SC Centers for Accelerated Technology, Williamsburg Technical College, and Trident Technical College before making his way to Horry-Georgetown Technical College in 2014. For the past six years, our Professor of the Year has served as an academic chair and professor for the Advanced Manufacturing and Industrial Technologies Department. His dedication to quality in teaching has changed countless lives for the citizens of South Carolina while helping industry maintain a properly skilled workforce. His students often express how he genuinely cares about their success and inspires a love for learning because of his unique perspective and experience level. Although he is adored by his students, fellow colleagues, and administration, his greatest fans are his three children. According to his two daughters and son, “His work ethic and wisdom are to be admired. We are grateful that he has instilled those values in us. To say we are proud of him would be an understatement.” 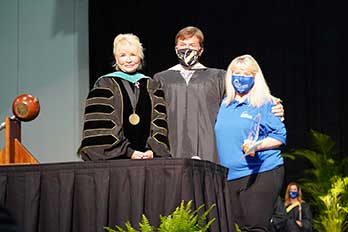 Administrative Assistant for Dental Sciences, Dana Gasque (right), received the Staff of the Year Award. Tim Tilley (center), Vice-Chairman for the HGTC Foundation presented a gift on behalf of the Foundation.

Just as we recognize excellence in teaching, the college also honors a member of our full-time staff for exemplary service. The recipient receives an award from the College and the HGTC Foundation.

Our 2020 Staff of the Year is a shining light, beacon of kindness, and advocate for our College.
Following graduation from Socastee High School, she entered the workforce in banking and received her General Banking Diploma from the American Institute of Banking. After working in various positions within the banking industry, she entered into Medical Transcriptionist Training and was number one in her class at HGTC when receiving the certification in 2008. With that achievement realized, she was able to become a Medical Transcriptionist for a company based in Charleston before joining the HGTC team as Administrative Specialist for our Nursing and Allied Health Institute. For the last five years, she has been a model employee and served in the vital role as Clinical Admissions Coordinator for our College. Those she works with describe her as EPIC because she truly serves as an example in utilizing effective professional and interpersonal communication skills within every email or telephone correspondence. It has been said that her work as the liaison between clinical sites and the College has been flawless due to her sole contributions and responsibility. We sincerely appreciate all that she has done to ensure institutional success. Her husband Tony says she often uses the quote from Audrey Hepburn, “Nothing is impossible…and the word itself says ‘I’m possible’.” 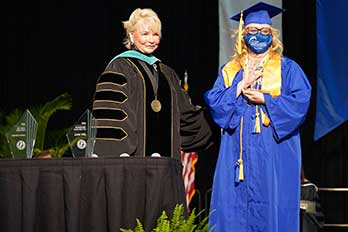 Paulette LaValley (right) received the Student of the Year - Leadership and Service Award.

The service and leadership award is given to a graduating student or group of students who best exemplify the values of our college. Recipients display a spirit of service, make significant leadership contributions, and demonstrate the values of responsible citizenship.

The 2020 recipient of the Service & Leadership Award models the qualities of a scholar-servant-leader dedicated to improving the lives of others. This HGTC student leader began with being elected as the Alpha Nu Sigma chapter president in March 2018. She has been an integral part of Phi Theta Kappa’s College Project and the Honors in Action committees during her tenure. She earned her Five Star Competitive Edge pin and her Employment Edge pin and encouraged other officers to complete these programs. In addition to her local responsibilities, she also served as the Carolinas Region President for the 2019-2020 academic year. She maintains a GPA of 3.63 in the Human Services program while serving the chapter, college, Carolinas Region and community. She recently received a Distinguished Chapter Officer Award at both the regional and international levels for her service - one of only 30 who received the award internationally. To top off the honors, she won a Distinguished Regional Officer Award for her service as the Carolinas Regional President in 2019- one of only 10 recipients internationally. 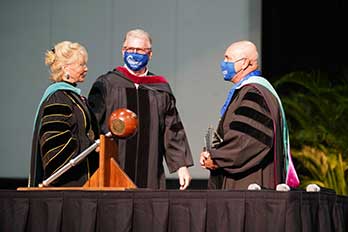 Dr. Hardee has served as president of the SC Technical College System for four years. Under his leadership, the System has made great strides in ensuring that a quality higher education remains affordable, accessible and relevant to the citizens of South Carolina. Technical colleges across the System have an average placement rate of 90 percent, making it a smart investment for future employment. Hardee graduated with a B.S. in Psychology from Coastal Carolina University and earned his M.Ed. in Counselor Education and his Ed.D. in Educational Administration from the University of South Carolina. He has served on numerous boards and councils dedicated to furthering South Carolina through education, workforce development and economic development. 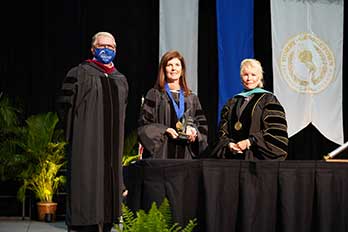 Mrs. Evette is the 93rd Lieutenant Governor of South Carolina and the first female Republican lieutenant governor. An entrepreneur and businesswoman, Mrs. Evette founded Quality Business Solutions, Inc. (QBS), a payroll, human resources, and benefits services firm headquartered in Travelers Rest. Under her leadership as President and CEO, QBS grew exponentially, going from start-up to one of the nation’s fastest growing small businesses. QBS has been repeatedly honored among the fastest growing and best places to work in South Carolina. Your Lieutenant Governor has received numerous business and professional accolades, including the ATHENA Leadership Award®; the Enterprising Woman of the Year Award; and the Women Presidents’ Organization 50 Fastest-Growing Women-Owned/Led Companies Award. Evette serves on the board of directors of the St Francis Foundation and the National Association of Professional Employer Organizations where she is also an emeritus member of the state legislative committee. A native of Ohio and the mother of three, Evette holds a Bachelors of Business Administration in accounting from Cleveland State University. She lives in Travelers Rest, SC and enjoys spending time with her husband David and their children as well as her mother Jennie who lives with them.